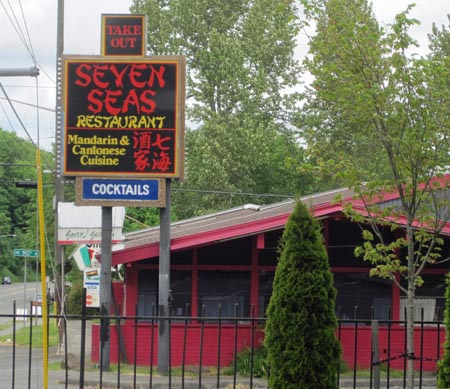 The former Seven Seas Restaurant, 8914 Lake City Way N.E., might soon become the newest bachelor party destination in the wake of Rick’s demise. According to a neighborhood flier (click to see a larger version), construction to turn the restaurant into a strip club will begin June 1. 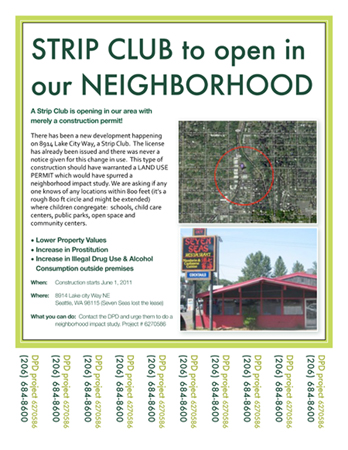 “I found out yesterday when one of my friends went to the Seven Seas Restaurant and the doors were closed,” Marilee Catero, a resident nearby the proposed strip club, told sister site Wedgwood View earlier this week. “She asked what was up and they told her they lost the lease and a strip club was now renting the space. Today was an incredible scramble trying to find out what happened.”

The permit, for an adult cabaret, has already been issued to the owner, Jack Johnson of Mill Creek. The strip club can be authorized for use in a commercial area because it’s located more than 800 feet from legally recognized or permitted public park and open spaces, community centers, elementary or secondary schools, or child care centers.

According to the Wedgwood Community Council, the Sacajawea Elementary School, 9501 20th Ave. N.E., is the closest school to the site at about 1,500 feet away. The closest child care center, at about 1,000 feet, is the Ryther Child Center, 2400 N.E. 95th St., which provides outpatient and prevention programs, as well as residential services for children.

Since the strip club is authorized for commercial use, no public notice was required for the permit to be issued, the council says.

However, Catero has been conducting her own public notice, circulating the above fliers around the neighborhood in hopes that the Seattle Department of Planning and Development will conduct a neighborhood impact study.

That’s not the only strip club action this week on Lake City Way. Yesterday, the U.S. Department of Justice announced 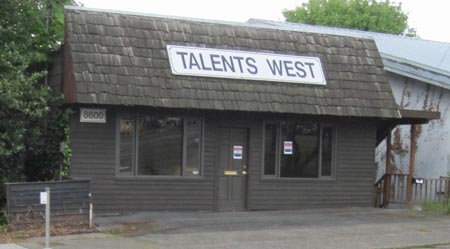 The buildings belonged to Frank Colacurcio Sr., who passed away last year, and his family, who ran the establishments for years. Allegations of prostitution, organized crime and money laundering led to an FBI investigation, which shut down the Colacurcio businesses.

Bidding starts at $100,000 for Rick’s, and $50,000 for Talents West. Part of the proceeds of the sales will benefit local law enforcement agencies that assisted in the investigation. More information on the sale is available is on the auction site, LPSAuctions. Our news partners The Seattle Times had a story earlier this week.

It looks like a situation of “out with the old, in with the new” strip clubs on Lake City Way, and this time, they’re even closer to home for some neighbors.

Any thoughts on this new information?

Katie Melton is the intern for Maple Leaf Life. She is a journalism student at the University of Washington.