Home intruder reported – plus an amazing 38 crime incidents near Northgate

A neighbor sends us an email with this in the subject line: “prowler/potential burglar thwarted in Maple Leaf.”

I wanted to let you know of an incident that occurred on 12/16/13 in our home in the 10800 block of 12th Avenue Northeast near Northeast Northgate Way.

At about 2:30 p.m. my partner was at home working, when she looked up from her desk and noticed a woman peering through the windows of our house. Since my partner was on an important work phone call, she didn’t go outside to confront the woman right away, but a few minutes later she heard the front door open, at which point she did confront the intruder, who was by this point standing in our living room.

When confronted, the woman stated she just came in to use the bathroom. The woman was in her 40s, about 5-foot-6 and 250-300 pounds, with long light brown hair, wearing a dress. 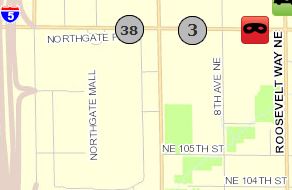 Speaking of Northgate, take a look at the snippet of a police crime map at right.

It’s the first time since the map changed format slightly that we’ve seen 38 different reports in the same small place – in this case in and around the 400 block of Northeast Northgate Way.

The time range is from the beginning of December to the present. The crimes are mixed – largely stolen vehicles, prowled cars and shopliftings. (We counted seven stolen cars and 11 car prowls before the map glitched out on us.)

The red-and-black mask? That’s the “cyborg bandit” we wrote about earlier who robbed the Northgate Sterling  Bank branch.

That stretch of Northgate, home to both the mall and the transit center, is known as a crime “hot spot.” In our earlier post we noted that more juveniles are arrested there – by far – than in any other place in Seattle.