Seattle Police say a quick response to a 911 call of a burglary in progress this morning led to the arrest of two men fleeing the scene in a silver Jaguar. 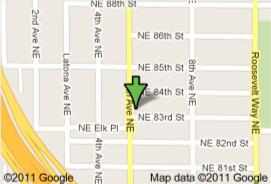 The call came at 5 a.m. from the 8300 block of Fifth Avenue Northeast, police say.

The most common crimes here are breaking into or stealing cars. There was a rash of home burglaries last winter, but they had slacked off last time we looked in early August.

Here’s a look at home burglaries since, according to police reports.