More about those bald-faced hornets

We wrote in late August about a bald-faced hornet nest at 8th Avenue Northeast and Northeast 91st Street.

Here’s more information from our news partners at My Ballard.com.

When Sunset Hill resident Yvonne Nelson discovered what she thought was a bee hive in her front yard she didn’t know what to do. Should she send her husband Eric out to take care of it or call in an expert? They decided to pay the money for someone else take care of it. 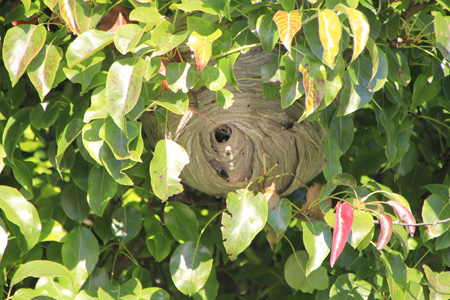 When Dan the Bee Man arrived at their Sunset Hill home on a Saturday evening, he took one look at the basketball-sized nest and told the Nelsons and neighbor Mark Russoto that it wasn’t a bee hive, they had a bald-Faced hornets’ nest on their hands. 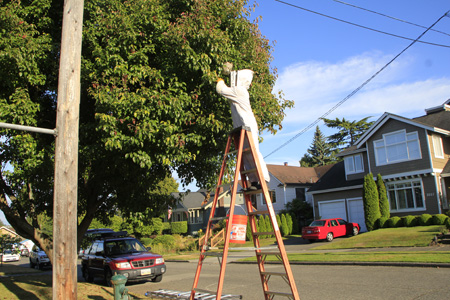 So Dan suited up, climbed the ladder and tried to get the nest down in one piece. The plan was to submerge it in a bucket of soapy water and kill the bald-faced hornets. With Dan up the ladder, half of the paper nest fell off and the hornets got angry. “That wasn’t supposed to happen,” Dan remarked behind his netted head gear. 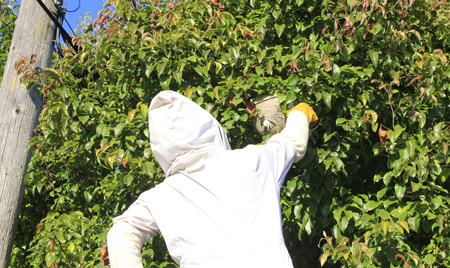 These particular hornets are actually in the wasp family, Dan says, and are very aggressive. Most Ballardites he works with have Yellow Jackets, which are very common in our area – and are also quite aggressive. 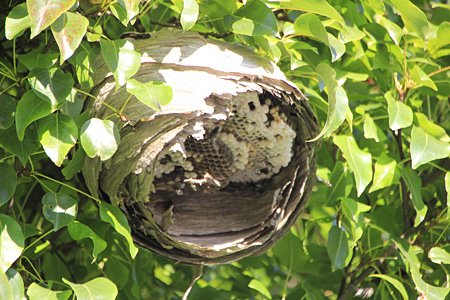 Dan tells us that when people find a hive or nest in their yard, they don’t necessarily have to get rid of it. “If the nest is outside and visible, for example in a tree or a bush, people should consider leaving it be,” Dan says. “But if let’s say the nest is in the far corner of the back yard, and high enough above the ground that the inhabitants are not bothering anybody, homeowners can just wait them out.” Each fall, Bumble Bees, Paper Wasps, Yellow Jackets and Bald Faced Hornets dies off. “Only the new queens survive the winter, they hibernate individually in wooded areas or in the ground,” Dan says. Only honey bees survive, although their activity slows down in the winter. Oftentimes Dan says that Yellow Jackets will build a nest inside the wall of a house. He tells us that it’s a bad idea to seal them in with caulk or foam spray, he says. “There is a good chance the insects will find another way out, possibly into the inside of the house. If you do manage to seal them in, they will all die inside the wall, and rotting larvae can produce a really foul odor.” 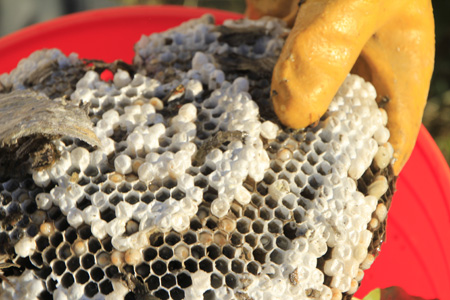 The nest is full of white larvae.

The Nelsons decided that the nest, which was in the planting strip next to their driveway, had to go. Dan says it’s best to call in an expert instead of grabbing a can of Raid. “That stuff is highly toxic, not just to wasps, and can harm or kill other insects (like honey bees), and even pets and humans,” Dan tells us. “External nests have many layers of paper that the poison has to soak through to be effective. Chances are a single application won’t be successful. Even if it is, you are still left with a big poison soaked ball that you have to dispose of somehow.”

If you find yourself with a nest in your yard or walls, the Puget Sound Beekeeper’s Association has a “Swarm List” with names and numbers of professionals who will help you with a swarm or nest.

For my complete transcript of the email interview with Dan the Bee Man, click here (.pdf).