Donate to Hope – in the shape of a Golden Retriever

Hope, in this case, was a Golden Retriever. 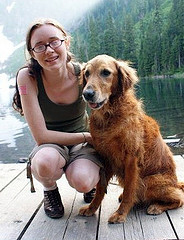 Hope and Jessica were also regulars at Cloud City Coffee, 8810 Roosevelt Way N.E., and that’s where an exhibit of prints of Hope by Jessica, an artist,  is currently hanging.

Jessica is selling the prints – you can pick one up at Cloud City in return for a donation, or go to her online store. They’re not expensive; the suggested donation is $25.

Hope, in this case, is also to raise the money to replace Hope with a new service dog in Jessica’s life. You can read more about it at her website.