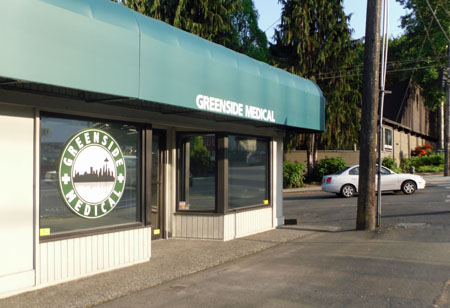 Update June 8: Our news partner The Seattle Times has a story about Kent ordering the closure of any medical marijuana dispensaries in that city.

While the fight over medical marijuana raged nationally and in Olympia, a non-profit marijuana dispensary quietly opened at the corner of Lake City Way Northeast and Northeast 98th Street.

The dispensary is Greenside Medical, 9804 Lake City Way N.E., and is a non-profit organization, run by its two founders and a staff ranging from between two to five employees.

Is dedicated to being the premier medical marijuana dispensary in Seattle, WA. Here at Greenside Medical, we are committed to providing our patients with a safe and secure environment with the highest quality locally made, natural medicines.

And it has specific requirements for patients: “In order to apply to be a patient of 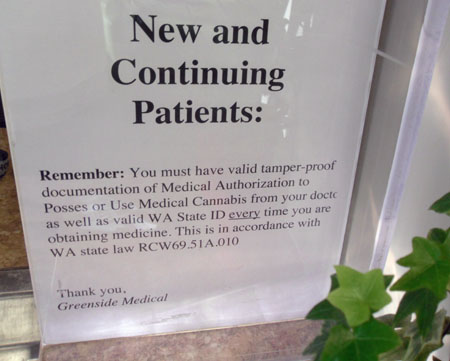 Greenside Medical you must already have a valid Washington State Medical Marijuana Authorization as defined by Chap 69.1a RCW.”

That means a “green card,” obtained from a physician who prescribes medical marijuana as a legal natural medicine.

Because by law it is illegal to sell marijuana, Greenside stays in business by receiving donations.

“You cannot purchase anything here. It’s all donated,” Seth Simpson, one of the founders and managers, said. “Patients get it for a suggested donation, and we get donations (of marijuana) from patients.”

Opened a month and a half ago, Greenwood is certainly not the first medical marijuana dispensary in Seattle. Our partner blogs My Ballard and Phinneywood recently posted on new dispensaries. From Phinneywood:

In 1998, Washington state passed a law that allows patients suffering from terminal or debilitating physical conditions to use medical marijuana. However, marijuana use remains illegal under federal law. The state law is actually vague on who exactly can grow medical marijuana and how much.

That situation didn’t get any better when the state Legislature last month abandoned attempts to clarify the situation. “Cities around the state will have to choose between tolerating dispensaries or cracking down,” The Seattle Times reported. It also quoted King County Prosecutor Dan Satterburg:

“Dan Satterberg knows there’s 30,000 patients in the Seattle area that rely on medical marijuana,” Simpson said. “If they shut us down, those patients will go back to purchasing off the streets. I’m not sure what’s going to happen.”

Here’s how Greenwood Medical hopes to work: “Each patient (with a legally obtained green card) is allowed to grow up to 15 plants,” Simpson said. “Usually what happens is that there’s overage because they can’t go through that much in 60 days. They donate what’s left to us, we look at it to make sure it doesn’t contain any bugs or mold or anything that would negatively affect the patient, then package it here.”

Simpson asked us not to publish his photograph, and – since Maple Leaf Life doesn’t have a green card – we couldn’t inspect the merchandise. There are photos here, though.

Simpson says that he would like to see a regulated, strictly medical system for legalized marijuana. However, he says that this is still far off.

“We’re here for the community and to keep people safe,” he said. “We have RA patients, AIDs patients, cancer patients and army veterans. We have a wide variety of people. These are people who are in pain every day and marijuana is the only thing that works for them.”

Simpson mentioned that safety is of the utmost priority at Greenside Medical. The dispensary has magnetic locks on all the doors, barred windows with protective glass to prevent breakage and cameras throughout the office. The check-in area has bulletproof windows and a bulletproof desk.

“There’s always police around here, so that’s nice,” Simpson said. “Not many dispensaries have police doing their paperwork in the back parking lot or waiting across the street for people to speed on by. It deters people from breaking in.”

Simpson doesn’t know what the future holds for the dispensary, with the marijuana proposals taking a step backwards. As of now, he remains optimistic.

Katie Melton is the intern for Maple Leaf Life. She is a journalism student at the University of Washington.