When LC’s Kitchen opens for lunch at 11:30 this morning, just five days will remain before the doors are locked  for good.

The popular neighborhood restaurant, which just celebrated its seventh anniversary on March 4, will close at the end of the night this coming Saturday, April 2. 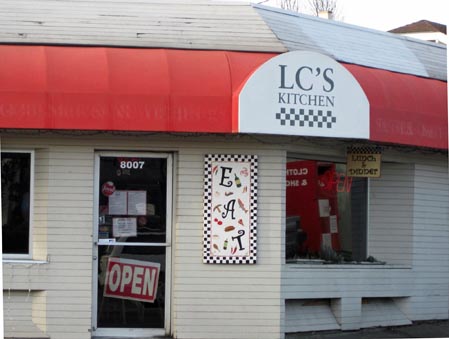 Wickey, who for years was a mainstay of the old Maple Leaf Grill (before it burned down and was reopened in its current location), said their landlord indicated on March 19 that he wanted them out, or he would significantly increase their rent.

Several readers have already commented on the restaurant. “This place is a Maple Leaf favorite, my husband and I have frequented them for the last 7 years,” one wrote. “Hate to lose such a homey local place!” said another. And Annie wrote on Maple Leaf Life’s Facebook page: “Please tell your friends and neighbors to go to LC’s Kitchen at 8007 Lake City Way before April 2nd! Its their last day! :(”

Several years ago the Seattle Post-Intelligencer wrote, in a review of The Jones Bistro: “Years from now, when Maple Leaf is known as ‘the new Ballard,’ we’re going to mark The Jones and nearby LC’s Kitchen as the spots where it all began.”

Now all, including the P-I, become history.

A review in the Maple Leaf Community Council newsletter praised LC’s: “The restaurant is small, the view at best could be described as ‘territorial’ (Lake City Way rushes by just outside), the food superb. Wickey specializes in fresh fish, decisive spices, tangy salads. Market-fresh seafood stew can change daily, and has never disappointed. Grab the oyster stew, if it’s on the menu, and delight in luscious oysters bathed in a garlic cream sauce. It’s so rich it might count as dessert.”

Wickey said she doesn’t know exactly what comes next. “I need to stop and rest and figure out the next step. There’s something out there – I just know it.”

And she thanked her customers. “I’m just completely grateful for the amount of support and following I’ve had.”

She said fans can stay in touch with LC’s through the restaurant’s Facebook page, where the most recent post is: “LC’s Kitchen Last Breakfast, Lunch and Dinner!”