Calling all hometown coyotes, frogs and snakes. Together with other reptiles, amphibians and mammals who originally lived here.

A noted naturalist who is also a Maple Leaf resident is wondering how many of our native animal species are still in the neighborhood.

“I’m wondering what part of the original fauna of the city is still hanging around in what seems a nicely wooded neighborhood with natural amenities such as the Thornton Creek ravine,” writes Dennis Paulson.

“When we first moved in here 19 years ago, I would occasionally hear a coyote, but I haven’t heard one for many years now.”

Paulson is director emeritus of The Slater Museum of Natural History at the University of Puget Sound. He is an internationally acknowledged expert on birds and dragon flies, and can sometimes be seen on the street here photographing the Scarlet-fronted parakeets of Maple Leaf. 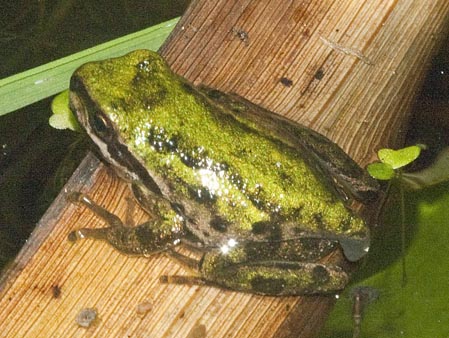 “We know they hatched, as we saw small tadpoles and a few metamorphosed individuals, but I have neither seen nor heard any frogs since then,” Paulson writes.  “It would be so cool if they did get established in the neighborhood, but I don’t know if our pond will be suitable or not. They were certainly here originally, but most of our reptiles and amphibians seem to be wiped out by urbanization.”

Paulson wants to get emails from anyone who spots native wildlife. “I welcome hearing about any frog, salamander, or snake that anyone ever sees anywhere near here! Ditto native mammals other than raccoon or bats or moles.” Editor’s note: He does know about the beavers in Thornton Creek Park No. 6.

“It is important to point out that two commonly seen mammals, eastern gray squirrels and possums, are not native.” That means he doesn’t need reports about them, nor the aforementioned raccoons, bats or moles.

“I have never seen a reptile or amphibian in the neighborhood, nor any native mammal other than the ones I named.”

For other critters,  email Paulson: dennispaulson at comcast.net.