Think Northgate Mall is just for shopping and dining? Think again. It’s also about education, at least for the 45 students who attend Northgate Middle College High School, located on the second floor of the mall just south of Macy’s. 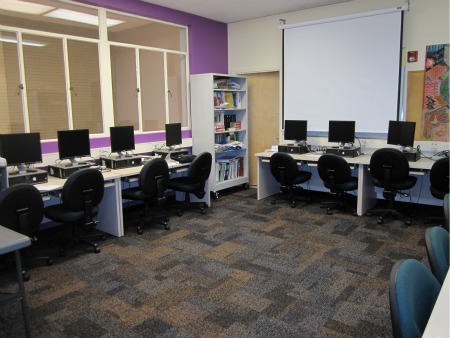 Students at Northgate Middle College High School can look down on shoppers from their classrooms on the second floor of Northgate Mall.

Although the space is available to the alternative public school for free through a partnership with the mall’s Simon Youth Foundation, budget cuts throughout the Seattle School District are taking a toll on the school, which has seen its teaching staff reduced from five to two teachers since it opened 10 years ago. 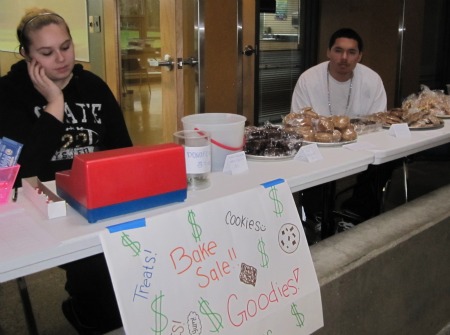 So the students are taking matters into their own hands, holding a bake sale on Saturday (shown at left) at the Northgate Community Center, with plans for an even bigger fundraiser on March 3: the Spring Fling Silent Auction from 5-7 p.m. at the mall’s Ben Bridge Court.

“Seattle has had a really good history of alternative schools, but the budget cuts are really hurting,” said humanities instructor Beth Brunton, who says she teaches three digital classes on different subjects and in different rooms at one time.

Northgate MCHS senior Delaney Grieve, shown above with junior Clayton Byrd, said that earlier this school year the lunch program was almost cut by the district until students put up a fight to keep it intact. Brunton explained that for some of the students, that lunch is the only full meal they eat in a day.

The school accepts students ages 16 to 20, many of whom are at risk of not graduating or who already may have dropped out of the traditional school setting.

“What excites me is their dreams. They want to help our community, they don’t want to get left out.”

Grieve, the mind behind this weekend’s bake sale, speaks with pride about the school in a way that’s rare in many high school students: “It’s small and the teachers are so helpful,” she said. “They get you on track to graduate if you’re not going to, and the school has great scholarships.”

Nearby North Seattle Community College is also a part of this unique public-private partnership, which helps prepare students for college by allowing them to work independently.

To RSVP or for more information on the Spring Fling Silent Auction, contact Brunton at bethbrunton@seattleschools.org or 206-366-7940. And we’ll have more details on the event, such as auction items, as the date nears.