The arrival of Sound Transit’s North Link light rail is hardly around the corner, but well over 100 residents of Northeast Seattle nonetheless turned out for last night’s final design kickoff meeting at Roosevelt High School. 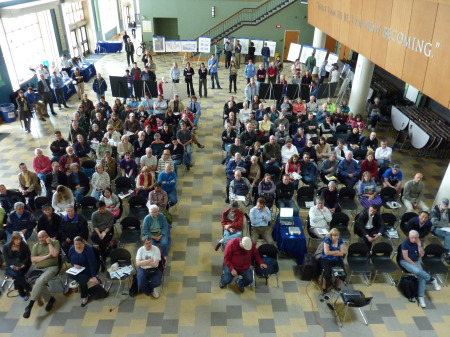 The $1.3 billion light rail extension that will connect transit riders as far north as Northgate to the current light rail system that stretches from downtown to Seattle-Tacoma International Airport isn’t expected to be completed until 2020, but signs of the project will be noticeable in Maple Leaf much sooner.

However, if Sound Transit has its way, the effect on Maple Leaf residents could be even less noticeable than the current proposal.

At the meeting, University Link Deputy Project Director Ron Endlich introduced a new proposal to keep the light rail line underneath Interstate 5 farther than the current proposal, which has the trains beginning their rise to freeway level starting at Northeast 75th Street. Under the new proposal, they would rise above ground en route to the Northgate station starting at Northeast 85th Street. 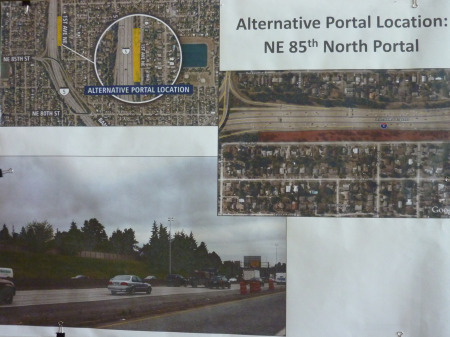 Endlich said the new proposal offers better freeway access for trucks and other construction vehicles to keep them off of residential streets, and it would be less disruptive to traffic than the original approach, which would require four cut-and-cover tunnels under freeway bridges from the Roosevelt to Northgate light rail stations.

“This will improve our overall construction schedule,” Endlich said. “We believe it will also have a lower net cost to taxpayers under this approach.”

Because of the easier access to the freeway, Sound Transit is also recommending that the boring machines that will dig the tunnels all the way to the Brooklyn station in the U-District be launched from the “portal location” at 85th Street, then travel south to the Roosevelt and U-District stations before being removed from the ground.

According to a flier from the meeting, the proposal is expected to save $5 million to $10 million.

The meeting, which was mostly an informative open house to help the community learn about North Link, also featured a number of posters showing the location and attributes of the future stations.

First, Sound Transit has to finish the University Link light rail portion of the project, which is set for completion in 2016 and includes stops on Capitol Hill and at the University of Washington next to Husky Stadium. 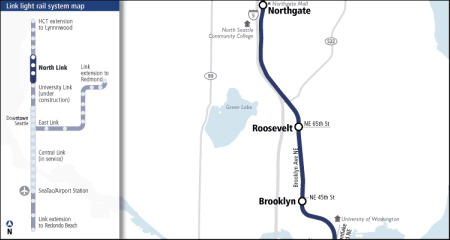 What do you think about Sound Transit’s proposal to keep the light rail underground for 10 additional blocks next to Maple Leaf? Endlich says Sound Transit plans to provide more information about the proposal at another meeting in the fall, so stay tuned and we’ll keep you posted.