Although the Seattle City Council already approved $5 million for a pedestrian/bike bridge over Interstate 5 along with another $5 million for additional bike/pedestrian improvements around Northgate Station, the Sound Transit board has yet to agree to the joint proposal.

On Thursday, the transit agency will consider the Northgate Station Access Strategy proposed by City Councilman Richard Conlin, which would commit Sound Transit to: 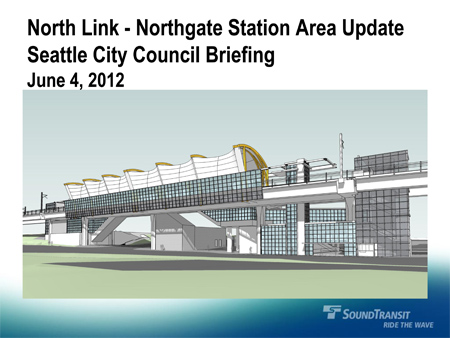 The board also is expected to make an important vote on the schedule and budget for the construction of the entire North Link light rail project, partially based on community feedback (click on photo above to view the slideshow of the most recent presentation). A summary of feedback is available on the Sound Transit website.

Although it’s perhaps not as important, the board also will consider adopting permanent names for the stations at the meeting. Naturally, we shouldn’t expect Northgate Station to suddenly become Maple Leaf Station, but we may get a shout-out after all.

Among the suggested permanent names is the “Maple Leaf Portal,” now known as the “North Portal,” where the light-rail tunnel ends at Northeast 94th Street and First Avenue Northeast. It’s possible the name might only be known to Sound Transit insiders and Maple Leaf residents happy to rise out of the ground again, but it’d still be ours!