As anticipation grows over the opening later this summer or early fall of the new Maple Leaf Reservoir Park, a firm has announced plans for redevelopment at the park’s north entrance.

There, at Northeast 88th Street and 12th Avenue Northeast, an easement will provide a new entrance to the park. The firm Build Urban proposes to replace a multi-family, somewhat dated building with four new single-family homes, each with five bedrooms and 3.5 baths.

The project is called “Canopy at Maple Leaf,”  and judging from the sketches it will retain many of the large trees currently on the property.

(We have the sketches, but are wrestling with WordPress to get them uploaded. You can see them at the “Canopy at Maple Leaf” link, above.

Two of the homes will be “traditional,” similar in appearance to the new homes currently next to the park entrance, according to Build Urban. “The two units next to the sidewalks maintain a more traditional look while utilizing contemporary materials, while the two units beyond these exhibit a more modern form.”

We are currently in the permitting process and expect to break ground sometime in the fall.

We expect them to be complete sometime in the spring of 2014 (timing is dependent on the permitting and construction process).

Currently it is too early to determine pricing of each unit. (They will) range from 2500-3600 approximate square feet. 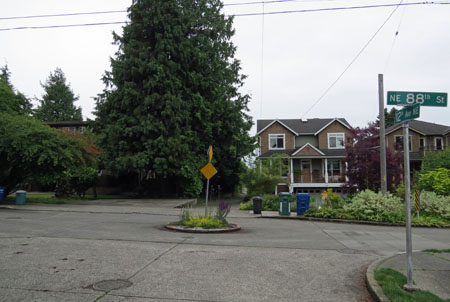